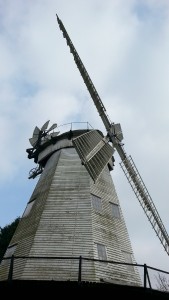 They say there’s a first time for everything. And everyone I told about this piece of work I did with RedQuadrant reacted with the above words. You see, I’ve worked in and with a range of charities, museums, libraries and archives for over 20 years, but I had never done a piece of work for a windmill before. Yes, a windmill. Until now. And as it’s a first for RedQuadrant too, they asked me to write a bit about what we did. Upminster Windmill is a beautiful iconic windmill built in 1803. It had fallen into disrepair in recent years, but thanks to the sterling efforts of local volunteers spearheaded by the Upminster Windmill Preservation Trust, things are now looking up. Detailed plans for its restoration are set to become a reality thanks to major pledged support from the Heritage Lottery Fund. We were asked to carry out a review of their governance structures and processes to help ensure that the windmill remains successful in the longer term, in the years beyond its planned restoration. So, here are some of the key learnings from this interesting and exciting piece of work: Maintaining strong leadership into the future It soon became clear that the board had a particularly strong and capable leader in its chair. And this isn’t surprising, as considerable leadership skills must doubtless have been needed to get to this point. A key part of our work was to look at how dependent the charity was on a single person’s efforts. Was there a succession
Register or log in to access the rest of this content.

Prev PostWhat Blue Peter taught me about fundraising campaigns
Next PostAre we getting it right? And who is? I Wish I’d Thought of That 2015