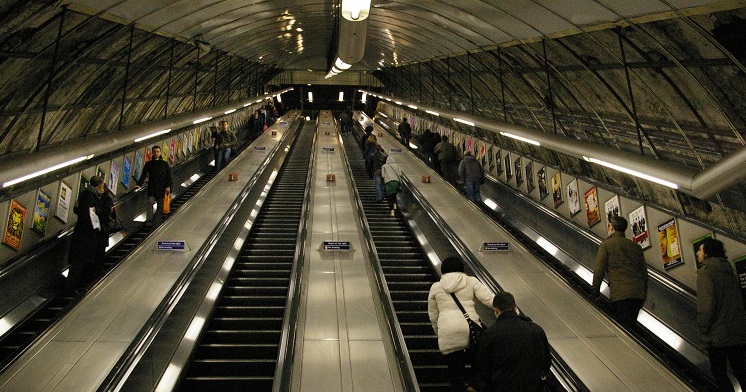 So, by now, I'm sure you're used to these blogs taking you on a tangential journey. But this time, I want you to join me at the foot of the escalator at London's Holborn Underground station. It's Monday morning, at a quarter to nine. Rush hour. People everywhere. You look up. And you wait to get on the escalator due to the sheer numbers, because you know that London Underground commuters stand on the right. It's a long tangential journey up (see what I did there?) though it's not the longest escalator on the Underground (that's Angel's, fact fans). It's not pleasant. Nobody looks at anyone else, and there's some tutting. Stand to the right. Pass on the left. Don't interact with the other commuters. Welcome to London. But why have I placed you at the foot of Holborn escalator specifically? Because they've been trialing a new system recently. As you know, custom dictates that we stand on the right and walk up on the left of the escalator. But nearly 60 million passengers use Holborn station each year, and in rush hour there's always a big queue to stand on the right. What if you made both sides standing only in peak hours? Would it increase throughput because more people can get on? Well, they trialed it for an hour (8:30am to 9:30am) each day. And guess what? Standing on both sides increased the flow up the escalator dramatically during rush hour, by over 27% in fact. There's much more analysis of why it worked in this article. But the poin
Register or log in to access the rest of this content.