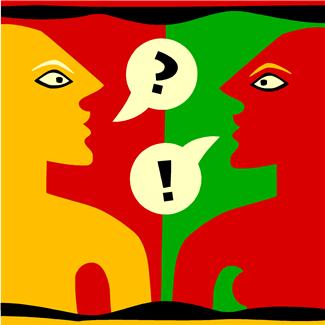 I attended an excellent panel discussion event last week. But one aspect irritated me about it. So what did I find annoying? It included a particularly contentious subject matter, on which a lot of the audience had strong personal views. And when the time came for questions to the impressive panel, each audience member instead gave their own views at length. They rarely asked anything other than rhetorical questions. And so the panel were largely responded to assertions and anecdotes instead. The interaction was much less satisfying than it should have been. Mind you, it inspired me to write this blog with six tips on asking questions, shutting up and listening in meetings or when networking, so it can't be all bad, can it? Asking questions shows you are interested. People like to talk about themselves. Everyone knows that. If you ask people open questions, you show them that you're interested in them and their organisation. It's not a trick as such, but I've found people respond well to well-asked questions. I so often hear colleagues say 'but what shall I talk about?' ahead of meeting new people. Ask questions. You don't have to plan topics to hold forth on. Even if you only asked questions, people think you're interesting too. This is an odd one, but I'm pretty sure it's true. And I think it's right. If you've got an enquiring mind, you're bound to be more interesting to talk to. Asking questions doesn't mean you're an empty vessel. You can show you've done
Register or log in to access the rest of this content.

Prev PostWhy we should listen to James, the station announcer
Next PostYou just rolled a six. What happens next?