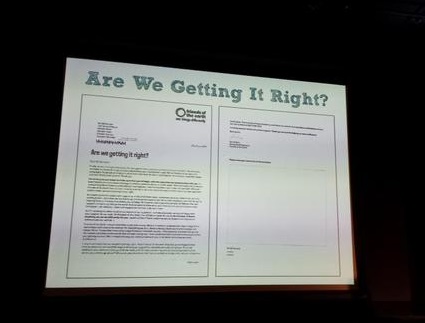 You don’t need me to tell you that charities, and fundraisers in particular, have been getting quite a kicking in the media this summer. And while a period of sober reflection and introspection is important, an event like IWITOT was a brilliant tonic to remind us of the brilliant fundraising ideas both old and new that can inspire us. It reminds us of why what we do is so important, and why we need to celebrate and learn from the excellence around us. The brilliant concept of IWITOT is that presenters do not talk about their own work, but instead focus on the fundraising of others. It feels liberating, and it reveals an underlying passion for the sector in all the speakers. It’s not just a job. That’s why Paul Amadi’s presentation about Friends of the Earth’s ‘Are we getting it right?’ campaign sent just as charities seemed to be most under attack particularly struck a chord. "They showed real courage & leadership" Paul Amadi on FOE'S 'Are we getting it right?' campaign at #IWITOT #yes pic.twitter.com/9bLG5FkHIv — Richard Sved (@richardsved) September 10, 2015 Here was a charity that didn’t hide below the parapet as many others did, but had the courage and showed leadership in reaching out to its donors, with excellent results. Other themes that came through prominently: Learn from fundraising history Going back in time, Matthew Sherrington told us about Oxfam’s fundraising back in the 60s; Simon Burne regaled us with stories and u
Register or log in to access the rest of this content.

Prev Post“You’re working where?”
Next PostWhy fundraising is a balancing act