I know that most of these blogs are built around metaphors, but…

…I really did once do the Hokey Cokey with Archbishop Desmond Tutu.

I’d like to tell you about why this particular song and dance is important to me, and what I learned from doing it with him, in particular. 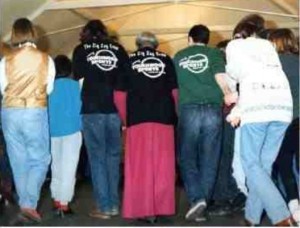 It was late 1994 and I was the only employee running a fantastic charity called KEEN, who provide social and recreational activities for young people with special needs, pairing them up with a huge army of student volunteers.

At the end of every session, we would come together as one big group and do the Hokey Cokey, and, for me at least, it summed up everything that was great about the charity. Why was it so important?

You can’t take it seriously – there’s no way you can look cool while shaking different parts of your body around, but for me that was kind of the point. We were all looking pretty silly together.

It’s easy – Hard to make it look good, maybe, but it was so simple that every one in the room, no matter what their disability, was able to take part in some way. It was about participation, eye contact and smiling.

We always did it – from the Hokey Cokey, I learned the importance of routine. It was something we always did. It was our thing. I learned that organisational pride can come from the oddest of activities.

And then one day Archbishop Desmond Tutu came to visit us.

But he didn’t stand on the side and watch, like a visiting dignitary. No, he put the charity’s T-shirt on over his robes and joined in. That’s me in the green sweatshirt next to him.

And I felt proud. Proud that someone famous and important was doing our thing. On a level with us.

Doing the Hokey Cokey with Archbishop Desmond Tutu taught me that we should never take ourselves too seriously. Nobody is too important to participate in anything.

And that you should always put your whole self in.

Prev PostTurning the wheel of fundraising fortune
Next Post“What are you trying to change?” – developing an integrated fundraising strategy