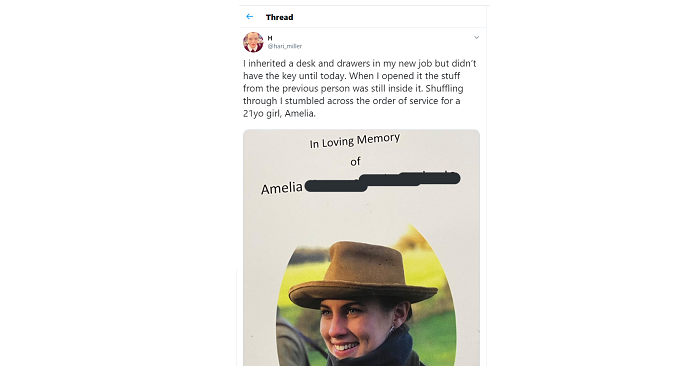 Last Friday, I was moved to donate to Epilepsy Society by a Twitter thread written by someone I don't know ("H" or maybe Hari) talking about someone she had never met, called Amelia. You can read the whole thing if you click through on the link below. This is a short piece on why it connected with me, why I think it reached so many others, and what charities can learn from the power of Hari's words. I inherited a desk and drawers in my new job but didn’t have the key until today. When I opened it the stuff from the previous person was still inside it. Shuffling through I stumbled across the order of service for a 21yo girl, Amelia. pic.twitter.com/VupNvkK1uj— H (@hari_miller) January 17, 2020 Just in case you can't read the whole thread, or you're not on Twitter (!), here's a quick summary. Hari had come across the Order of Service for a 21 year old called Amelia who had died from a rare form of epilepsy. Hari was moved to make a donation and subsequently received an email from Amelia's parents about what an inspiration she had been in her short life. They told me what that Amelia had made quite an impression in her short life. She’d arranged to donate her brain to epilepsy research when she died. And she had over 600 mourners turn up and spill out of the church at her funeral.— H (@hari_miller) January 17, 2020 Full disclosure: Epilepsy Society is a former client of mine, so I know how important the work they do is. But I wasn't alone in making a
Register or log in to access the rest of this content.