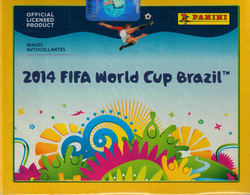 Hello. My name’s Richard. I'm 42, and I collect football stickers. There, I said it. Yes, I know that’s a little odd. Yes, I know I'm fair bit older than the majority of the target market. Yes, I know that I have nobody to swap with these days because not many of my friends also collect stickers. Yes, I know that it doesn't make sense to buy a packet of stickers without knowing whether I need the contents. And yes, I also know that I don’t need them as such, in the strictest sense of the word. So why do I do it? And what relevance does this have to this blog about the charity sector? Read on, and I'll tell you. Build a sense of anticipation. I only collect stickers in the run-up to major tournaments - World Cups and European Championships, rather than for the domestic teams. For me it's part of the build up, the mounting excitement. How do you build anticipation in the minds of your charity's supporters? Can you paint your own version of the 'Road to Brazil'? Remember that each supporter is different. Why did I reveal this slightly odd hobby? To illustrate that nobody is exactly who you think they are. Don't generalise. Don't tailor to a common denominator. Harness the power of shared experience. I like the fact that people around the world are all getting excited and collecting too. They'll all be watching the same matches, but supporting different teams. How can you harness that sense of togetherness in supporters of your charity? If you want
Register or log in to access the rest of this content.

Prev PostHelp me stop the clunking!
Next PostFor the love of London St Pancras